You are here: Home / Archives for dips

Roasted tomatoes and garlic make this the best bruschetta in the world. It’s so easy to make – no chopping tomatoes involved. 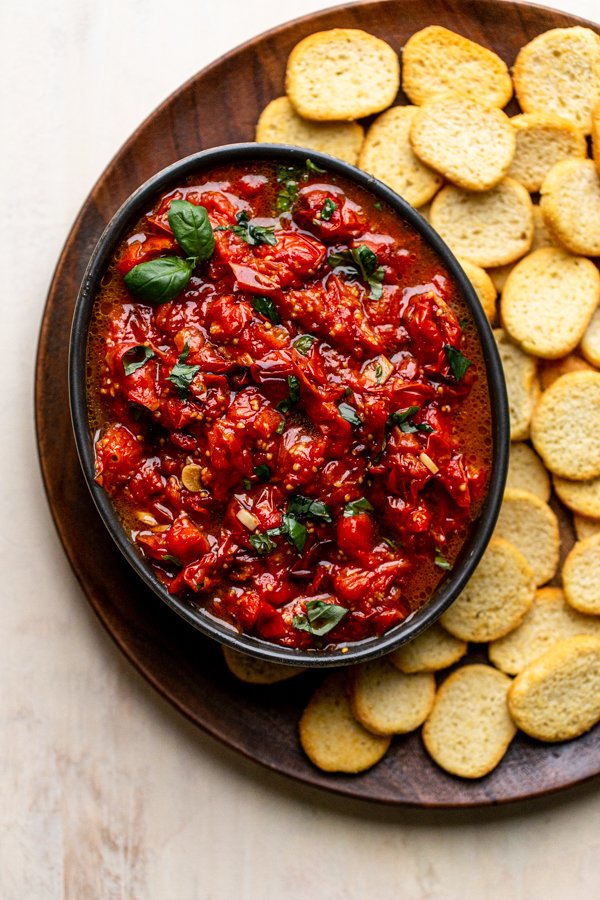 Sunday night dinners in our house usually end up to be some sort of Italian feast. J and I both have an undying love for gnocchi, pasta, more pasta, and pasta eaten straight out of the colander. Italian food is simple, and I grew up spending Sunday nights with my dad babying our latest sauce creation. Bruschetta is always the perfect appetizer.

So, a few weeks ago, J and I were wandering through the grocery store grabbing some odds and ends for our dinner, and he announced he had a hankering for bruschetta. LIGHTBULB MOMENT!

I said – “ooh I want to roast the tomatoes first and then make it”. I could see J inwardly groan, the man really just wanted some classic bruschetta. I have a tendency to go crazy with classics. We came home, started on our dinner, and I popped those little tomatoes in the oven with a healthy sprinkling of sliced garlic and a glug of olive oil. 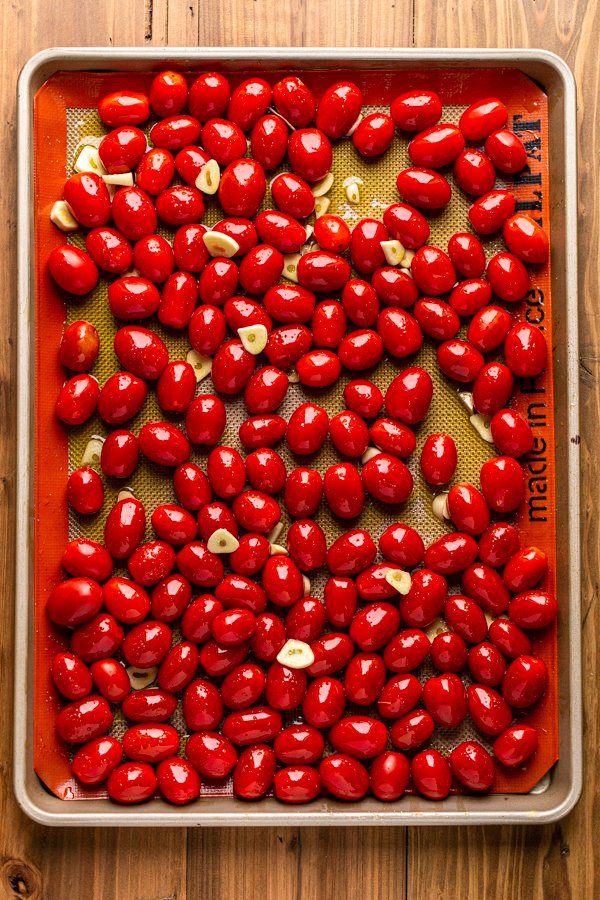 Sometime later when the tomatoes and garlic were roasted, I gave them a rough slice, added some basil and drizzled a bit of balsamic reduction. I sent him into the other room with the bruschetta and some crostini and a few seconds later, shouts of joy pretty much erupted from the other room.

THIS BRUSCHETTA DIP IS BOMB…and it’s so dang simple. I just had to make it again and give you the recipe for the Holidays. It’s red and green and refreshing & just a tad unexpected. You absolutely MUST make it. I honestly think this one makes my top 10 OTB. Seriously.

What do you need to make this roasted tomato bruschetta? 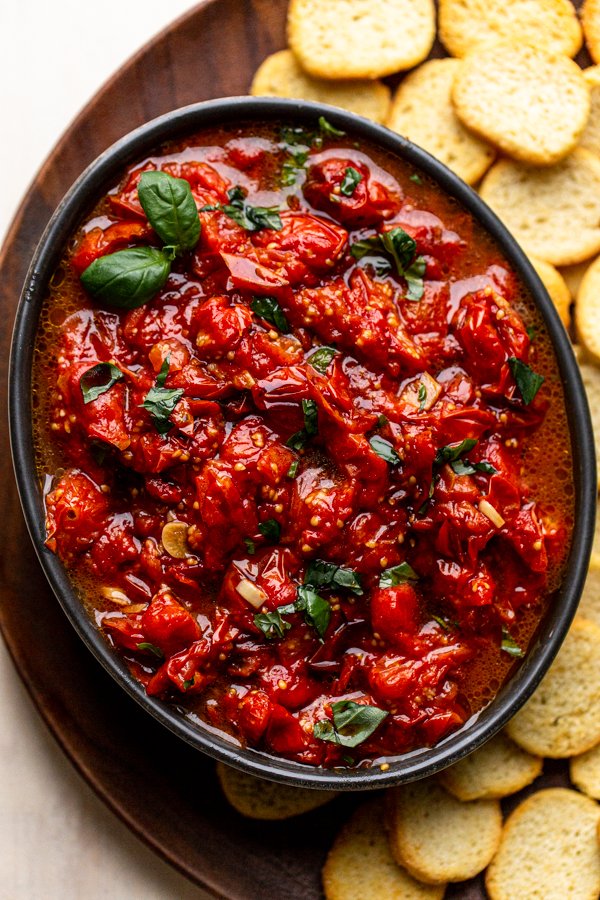 How do you make this easy appetizer?

This is the easy part. With traditional bruschetta, you have to chop a bunch of tomatoes, onion, and garlic. With this recipe, you just dump pints of cherry tomatoes on a sheet pan, sprinkle on some sliced garlic, and after you glug on some olive oil, it roasts in the oven until all of the tomatoes burst and reduce.

You can give everything a rough chop if you’d like, or just sprinkle on some chiffonaded basil and call it a day. Oh, and don’t forget the balsamic glaze drizzle. I just snag some balsamic reduction at the grocery store, you can find it right next to the vinegar. Or, if you want to get crazy, make your own!

Love easy appetizers? You have to try my roasted grape crostini recipe! You won’t believe what roasting grapes does to the flavor! Don’t just take my word for it, make it!

Roasted tomatoes and garlic make this the best bruschetta in the world. It’s so easy to make – no chopping tomatoes involved.

Healthy Halloween Appetizer to the rescue! 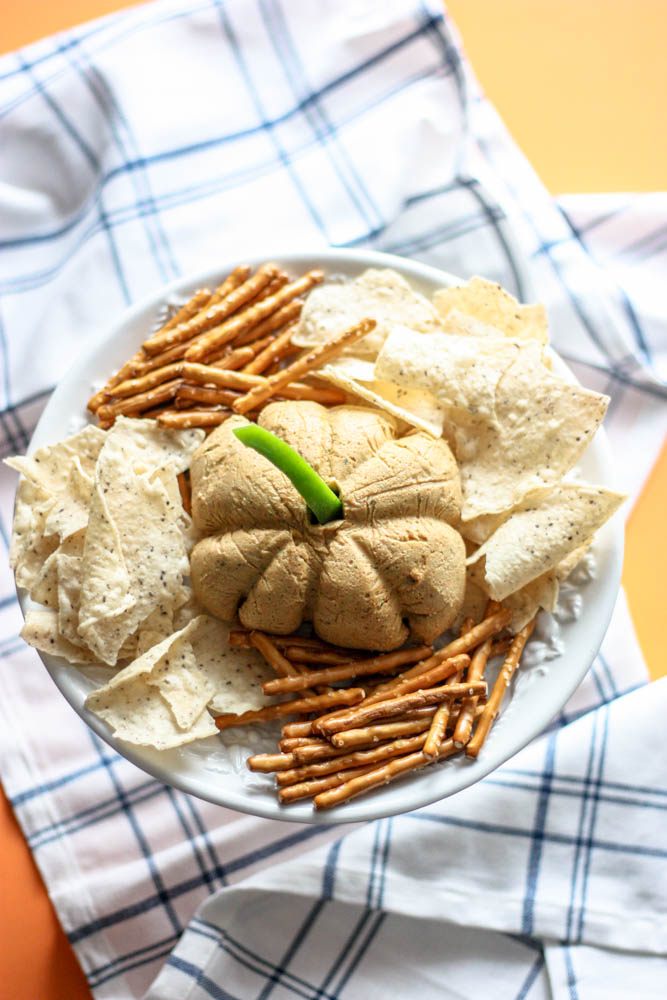 The cashew product for this post was graciously provided by Sunshine Nut Company. As always, all opinions remain my own. Thanks for supporting the growth of Miss Allie’s Kitchen.

Real talk – it’s really hard to walk into a party with a kick (ahhhem) butt spread and hold yourself back when you’re trying to eat more healthfully or if you have food intolerances or allergies. It seems like everything is loaded with the things you’re trying to avoid…sigh. 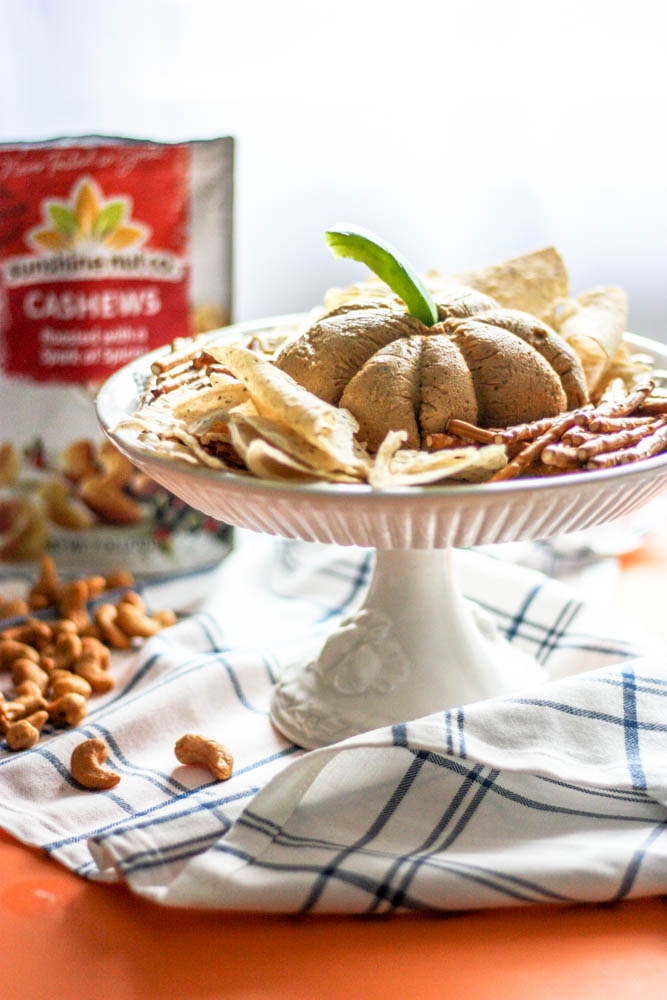 My solution – I try to bring something really exciting that everyone can indulge in. This Pumpkin Shaped Cashew Cheese ball is JUST the thing – I’ve actually tested it out at two parties, and it passed with flying colors. 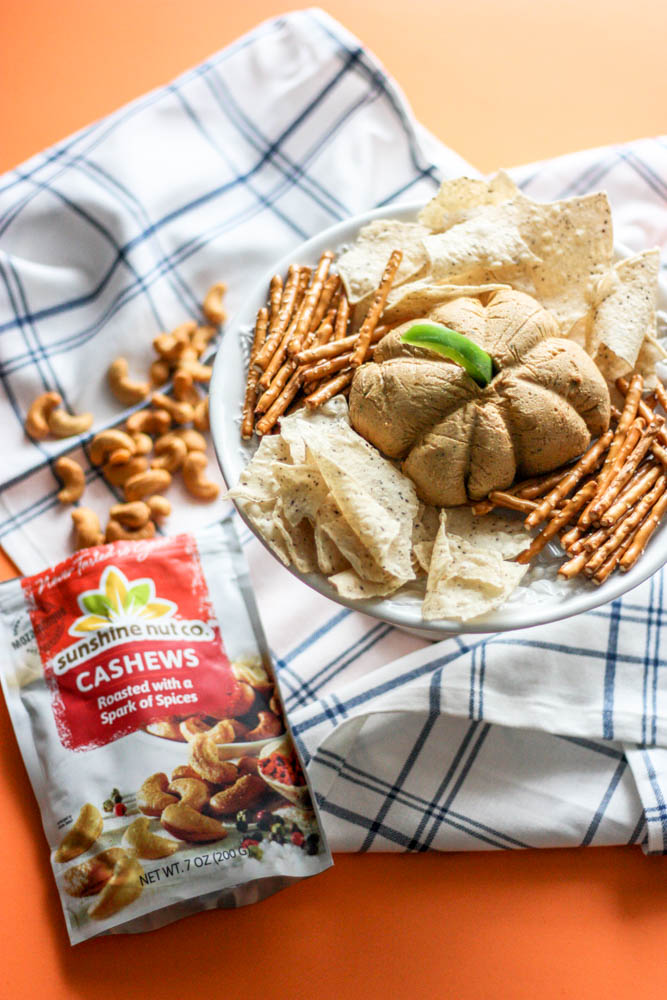 It takes a little planning, because you have to soak the cashews overnight, but the process is a breeze. For an extra kick, I used Sunshine Nut Company’s Roasted with a Spark of Spices Cashews. I think it added an EXTRA layer of flavor using the beautifully spiced nuts. 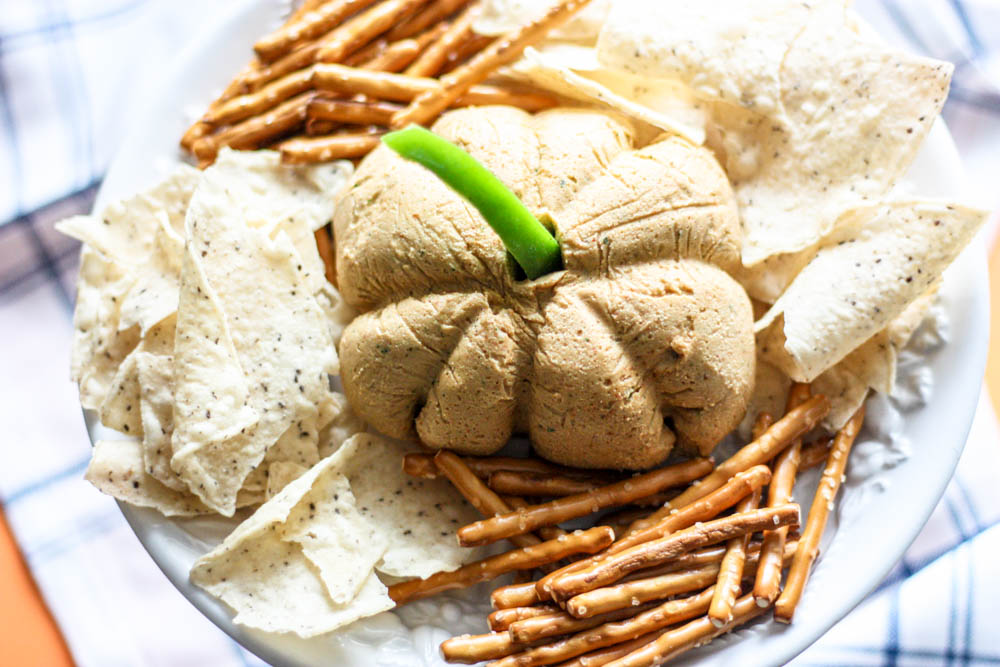 WHAT YOU’LL NEED (increments below in the printout): 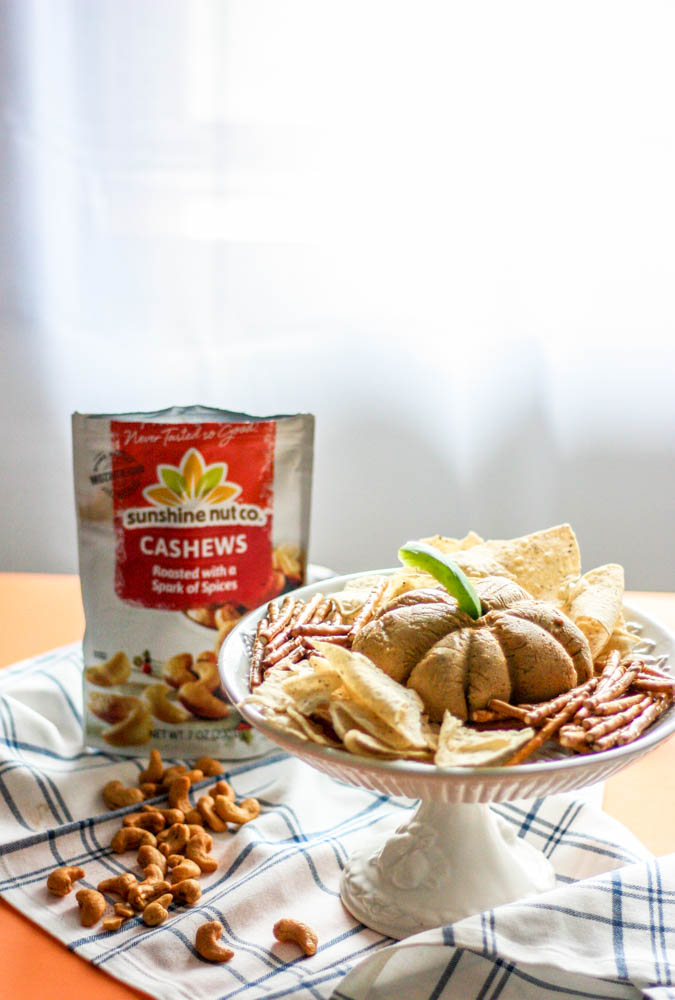 6 hours or the night before, pour the cashews into a glass jar or bowl with 4 cups of water. When you’re ready to make the “cheese” ball, drain the water and rinse the cashews. 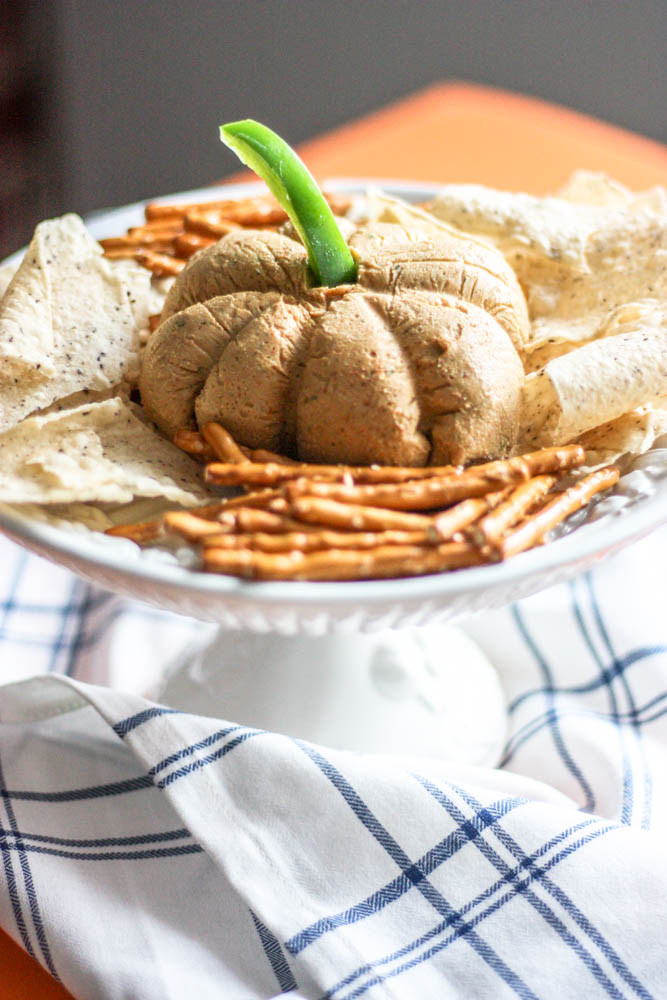 Scoop the cashew mixture out onto a sheet of plastic wrap, and form into a ball. If the mixture is sticking to your fingers, wet your fingertips with a bit of water. Wrap the ball in plastic wrap. Wrap the twine around the center of the ball, crossing over the center pulling so the twine indents the cheese ball. Do this 3 more times to make pumpkin shaped indents.

Place the cheese ball in the fridge for 2 hours, but up to overnight. When you’re ready to serve, add the pepper slice into the top of the cashew ball. Serve with crackers, veggies, pretzels, whatever you please!